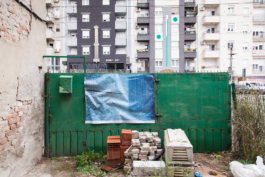 There and there - 'Aftersun' for Voždovačka Gallery

The exhibition takes place in the virtually limitless public space, whereas the artworks operate in the absence of the third dimension. Similarly to how the after-sun product becomes the surface of the surface (of our bodies), Aftersun project takes form of a thin layer that adopts the shape of the host.

What Vozdovac Gallery received from the five participating artists is a flat image, a portal which behaves as a reference. Placed either on windows, which give us permission to see but not to touch or to participate, or on thin flappy sheets across the borough of Vozdovac, the works translate fragments of ideas, thoughts or meditations. The second channel of these concepts is hosted online, with another iteration of each artwork taking place in an eternal void on the cloud. The contrast between these two contexts is extreme: in public spaces, the works might not last in their material form longer than a day, while online they will occupy some portion of data space for as long as the Internet exists.

To distinguish spam from genuine content is a hard task both on and offline. The project is set in a neighbourhood with a highly saturated aesthetic identity, which creates a possibility for the audience to perceive the artworks as part of the general corporate-advertising / DIY-self-promotion flow of information and imagery. The subject, which derives from an idea that all of us have a relation to the summer that’s passing, could be easily taken as one of the topics covered and advertised by travel agencies.

Each artist has their own mental connection to the summer, be it a nostalgic sentiment or a feeling of inertia, an association with a specific place or an idea of a swimming pool that could be located anywhere. From the periphery of Belgrade, in the final warm days of the year, we get in touch with their objectives through objects we’ve seen before, this time with a bit of new cream on, with an unknown, indeterminable expiration date. There and there - 'Aftersun' for Voždovačka Gallery 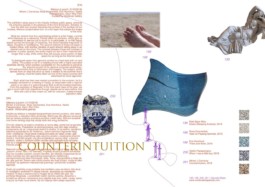